Surely At Quaquanantuck is not the only one with doubts about the modern world’s blind dependency on gee whiz technology. Setting aside for the moment the fact that social media—coupled with reality television—is responsible for the downfall of civilization, it seems important to address the issue of how readily we have handed over almost every aspect of our day to day lives to computers, artificial intelligence and smart phones.

The irony is not lost on At Quaquanantuck that this column, canceled by the print journal in which it originally appeared, could not exist without a domain name and a website. And outreach to the column’s audience would be unmanageable if not impossible without email and a system like Mail Chimp or Constant Contact. Still …

With so many things dependent on all our machines and devices functioning properly, what do we do when they don’t work? We have so thoroughly abandoned all the old tools—pen and paper, maps, printed calendars, land lines and pay phones, brick and mortar stores manned by humans, to name only a few—that we have no recourse when we don’t have a signal, we can’t log on to wifi, we run out of battery power, or the technology breaks down. And, increasingly, the technology is breaking down in more and more instances.

My key ring membership card for a local gym—its printed, antique technology, scannable bar code my identification and entrée—had started to delaminate like the deconstruction of a plastic onion and so I asked for a replacement. The attendant told me they were no longer handing out cards; I had to get the app and register my membership on my phone so I could check in using my phone in the future.

After the attendant agreed with me that all labor saving devices and improvements seemed to be requiring more and more time and labor to set up, I downloaded the app and painstakingly filled in all my account/membership information on the tiny screen with the blunt tips of my fingers. Now qualified to log in to my account and complete setting up the app, I was instructed to check my email for a verification code to complete the process. But no email ever came.

I tried again at home, four more times through the whole process, to get it set up; still no email. I took it back to the gym and patiently explained the problem. “Yeah,” the attendant said, “that’s been happening a lot; the app doesn’t always work. You should create a new email account and try that, even if you just use it to log in to your membership.”

“Really?” I said. “Couldn’t I please just have a card with a bar code like the one that fell apart; that worked every time and I didn’t have to do anything.”

“Sorry,” he said. “We aren’t giving out cards anymore.”

Then there was the appointment I had in Smithtown, about 45 minutes to an hour west of the hallowed boundaries of our idyllic village. I put the address in the GPS on my phone, assessed the timetable that popped up, clicked Get Directions, then Start Route, and off I went. Despite road work on the LIE and a few feeder roads and a couple of stopped school buses, I arrived almost exactly on time … in a residential neighborhood in Kings Park.

After a brief moment of panic, I thought to call the office, advise the staff that I was running late, and see if I could get some idea of how far away I might be and directions to the office. But this particular office relies on a medical services communication system run by artificial intelligence (really) and no one in the office picks up the phone anymore: they get a notification that someone has called and they call back, eventually. Meanwhile I’m poring over the map on my phone trying to figure out where the office might be in relation to the little marker that showed where I was, where the GPS had taken me.

And, in New York City recently, as some readers may have heard, thousands of parking meters all of a sudden stopped accepting payment by credit card or the city parking app on smart phones. How many New Yorkers are likely to be carrying around $5 to $10 worth of quarters these days? How much revenue did the city lose? The explanation? A “software glitch.”

Look. I get it. Modern technology is in a million different ways a godsend. But now that is has become essential, it doesn’t seem like anyone is doing much planning for how to proceed when and if any of the systems breaks down, is incapacitated by cyber warfare (yikes!), or otherwise stops working. And that’s more than a little disconcerting.

Forecast Favors Full Moon Night Hike at Refuge
Clear skies are predicted for tonight, Thursday, January 9, so nature lovers who haven’t already signed up might have a chance to celebrate the first full moon of 2020 on a Full Moon Night Hike at the Quogue Wildlife Refuge if they get the go-ahead by calling the QWR at 631-653-4771. While reservations, by telephone or in-person only (631-653-4771) are typically required at least 24 hours in advance, it’s worth a try.

During the 90-minute walk through the forest up to North Pond and back, adults and families with children age 11 and up will look and listen for nocturnal creatures and undertake some night vision activities under the light of January’s Wolf moon.

This program is $5 for Wildlife Refuge members; $10 for non-members. No online reservations are accepted for this program.

Library Film Feast at Firehouse Saturday Features “The Miracle Worker”
This Saturday, January 11, it’s time for another installment in the monthly Film Feast series sponsored by the Quogue Library at the Firehouse. This month’s selection is the 1962 film, “The Miracle Worker,” directed by Arthur Penn and starring Anne Bancroft and Patty Duke. 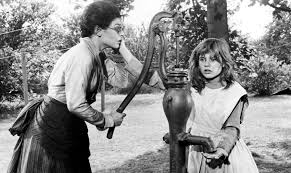 Blind and deaf after suffering a terrible fever as a baby, young Helen Keller (Patty Duke) has spent years unable to communicate, leaving her frustrated and occasionally violent. As a last chance before she is institutionalized, her parents (Inga Swenson, Andrew Prine) contact a school for the blind, which sends half-blind Annie Sullivan (an Oscar winning performance by Anne Bancroft) to teach Helen. While Helen is initially resistant, Annie gradually forms a bond with her and shows Helen ways of reaching others.

The feasting begins at 6:15 and the film will be screened at 7:15. As always, admission is a beverage to share and a dish that serves at least six. Best to call the library at 631-653-4224 to let them know you’re coming and what food you’re planning to bring.

There will be no yoga classes offered by the library during January. The new schedule for Amy Hess yoga classes will be on Thursday mornings from 9 to 10 a.m. beginning on Thursday, February 13.  The cost is the same as announced earlier, $10 per person. To get the jump on registration, call 631-653-4224, ext. 101.

There will likewise be no chair restoration yoga with Jillian sessions sponsored during January.

Earth Yoga at Wildlife Refuge Continues on Wednesdays
Readers are invited to connect yoga instructor Amy Hess, with the Earth, and with their own mind, body, and spirit during one-hour yoga classes in the Main Room of the Nature Center at the Quogue Wildlife Refuge on Wednesdays at 9 a.m.

This is another of Amy’s gentle yoga programs for all fitness levels, with a cost of $15 per class. Pre-registration is recommended, but walk-ins are welcome. Call 631-653-4771 to register.

Cheffes Collette and Pam are beginning 2020 with a menu from France, “since we just returned from our annual visit there, and the recipes are fresh in our thoughts. Enjoy authentic French cooking without the hassle of the paralyzing strikes and demonstrations.”

The cost is $39 for the three-course prix fixe; there will be seatings from 5 p.m. on Friday, January 10, and Saturday, January 11. The Inn Spot On The Bay just north of the Ponquogue Bridge in Hampton Bays. Call 631-728-1200 for more information or to make a reservation, or visit  www.theinnspot.com/internationaldiningseries to see the complete menu.

Because the play deals with issues related to college admissions and diversity, the HTC is offering free admission for high school juniors and seniors and their parents or guardians to the dress rehearsal of “Admissions” at 7 p.m. on Wednesday, January 15. Parents are advised that the play contains some profanity in the mouth of a 17-year-old boy. There will be a talkback with the cast and director immediately following the dress rehearsal.

Playing the diversity card cuts both ways in this “hilarious and provocative drama” by Joshua Harmon. Sherri Rosen-Mason is head of the admissions department, fighting to diversify the student body at Hillcrest, a New England prep school. With support from her husband Bill, the school’s Headmaster, she has largely succeeded in bringing a stodgy institution into the 21st century. But when their only son Charlie, deferred by an  Ivy League university, claims he is the victim of reverse discrimination because he is white, personal ambition collides with progressive values, with convulsive results.

Presented at Lincoln Center in 2018, “Admissions” was the winner of Drama Desk and Outer Critics Circle Awards for Outstanding Play. In a review for the New York Times, Jesse Green called the play “astonishing and daring … good satire at work, causing us to think critically about people we don’t at first recognize as images of ourselves … An extraordinarily useful and excruciating satire—of the left, by the left, for the left—for today.”

New York City based playwright Joshua Harmon is also the author of “Bad Jews,” “Significant Other” and “Skintight.” After its success in two separate Roundabout Theatre Company productions in 2012 and 2013, “Bad Jews” went on to be the third most-produced play in America in the 2014-2015 season, and has had productions in London’s West End, Australia, Canada, Germany, Israel and South Africa.

Following the invited dress rehearsal for high school juniors and seniors on January 15, “Admissions” runs at the Quogue Community Hall from January 16 to February 2, with performances on Thursdays and Fridays at 7, Saturdays at 8 and Sundays at 2:30. An additional matinee performance will be offered during the final weekend of the production, on Saturday, February 1, prior to the regular 8 p.m. performance that evening. Talkbacks with the cast will be offered following the 7 p.m. performances on Thursday, January 23, and Friday, January 24.

The Hampton Theatre Company is offering special dinner and theater packages in collaboration with the Westhampton, Southampton, Hampton Bays and Quogue libraries. A special lunch and theater package is also available for the Saturday matinee on February 1, with lunch before the show at the Quogue Club at the Hallock House. Discount tickets are available for veterans, Native Americans, under 35, students, and groups. For reservations and information on all packages and available discounts, visit  www.hamptontheatre.org or email info@hamptontheatre.org.

Your Comments Welcome
At Quaquanantuck is happy to provide a forum for civil discussion of village issues and initiatives and welcomes all comments. All are encouraged to share observations, ideas and opinions by writing to AtQuaq@gmail.com.

At Quaquanantuck encourages readers to send in news and notes and photos of interest to Quogue residents, even if the items are being sent from winter addresses or other parts of the country—or the world. Friends and family who enjoy all things Quogue are encouraged to email AtQuaq@gmail.com and ask to be put on the mailing list.

This is a text widget, which allows you to add text or HTML to your sidebar. You can use them to display text, links, images, HTML, or a combination of these. Edit them in the Widget section of the Customizer.
Loading Comments...
Comment
×
%d bloggers like this: